In addition to being compact and ruggedly built, the highly portable MOTU 624 is designed for a wide range of users—from singer/songwriters to industry professionals. For the former, MOTU put a pair of ¼-inch, high-impedance inputs (with gain knobs) on the front panel, giving guitarists and bassists easy input access. For the latter, the rear panel includes two XLR mic inputs, sets of four TRS input and output jacks, in addition to its main outs and optical digital connections accommodating S/PDIF or ADAT I/O.

As you would expect, the 624 is capable of 24-bit, 192kHZ resolution with pristine clarity, thanks to the interface’s new converters. But what helps this model pole vault over its competitors is its wealth of interfacing options. The 624 is a hybrid interface sporting USB3, Thunderbolt 2, and AVB connectivity. A recent firmware update allows you to record directly through Ethernet to any Mac that can also support Thunderbolt. And, you can network up to five AVB interfaces via Ethernet, which can support long cable runs and recording setups in multiple rooms.

Compact audio interfaces are in plentiful supply these days, but few can approach the versatility, sonic quality, and generous I/O of the MOTU 624. 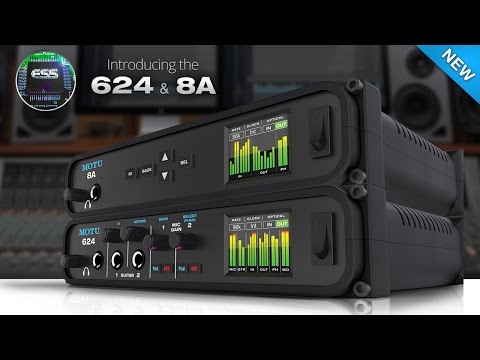